In many parts of Lincolnshire people are surprised to see a wild deer, aren’t they rare and worthy of protection? Contrastingly in the south-western part of the county people often report large numbers of deer, that impact on the biodiversity of woodland. In fact these beautiful wild deer were not recorded in a county survey by the Lincolnshire Naturalists Union in 1912 (Blaythwayt). Today wild deer can be seen in increasing numbers throughout much of Lincolnshire where did these six species, which are listed below come from? 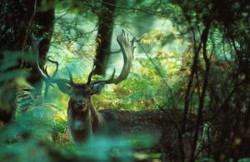 In southwest Lincolnshire the scattered woodland of the Kesteven uplands supports large numbers of Fallow deer, these have been recorded at a density of 40 km2 in the (Harris, el al 1995). The story of these Lincolnshire fallow deer begins after their Norman introduction (Lister, 1984) and is closely linked to Forests and Parks, land management practises that came to prominence in Medieval England.

Kesteven Forest – The Forest of Kesteven had been disbanded c1200, since when the fortunes of the deer has depended on parks. Lincolnshire’s first park, Irnham which was started in 1246 (Cantor, 1983) and remained in use until the 1914/18 war, making it the most enduring of the county’s park, though at that stage it was against the house, an unusual attribute for a medieval park. Kenneth Whitehead (1964) reported that since 1939 a “number of stray deer have been noticed… particularly in the woods around Bourne woods” which “escaped from Grimsthorpe Park”, before it was abandoned in 1949. A few deer were noticed at Casewick Hall in 1953 which had “undoubtedly escaped” from Burghley Park (Whitehead, 1964), deer are still kept at Burghley which in 1964 relocated them to the lower park against the Lincolnshire border (Culverhouse, 1998). Another park that may have seeded this population is Belton established c1656 (Shirley, 1867), Whitehead (1964) wasn’t aware of any breakouts, however it was not until a new fence was installed in 1980 that leakage stopped (Kesteven Deer Society,
papers).

Lincolnshire Wolds – the Park at Scrivelsby may date from the medieval period, which together with the nearby park at Revesby that was established c1864 have seeded a small wild population.

Brocklesby, North Lincolnshire – The Park at Brocklesby Park was established in c1740 and kept fallow deer until the last war when it was used as a battle training school. Fallow deer in the area are mainly descendants from this source, mostly keeping to the estate.

Normanby, North West Lincolnshire – This Park keeps both Red and Fallow deer and escapees have occurred.

Read’s Island – The island was managed as a wildfowl sanctuary, after difficulties managing it with sheep and cattle, fallow deer were introduced in the 1970s. The deer multiplied, despite regular culling and numbered about 180 by the early 1990s when it was decided to remove all the deer and numerous efforts were made to live capture them, these failed and most were culled. Today the island is managed by the Royal Society for the Protection of Birds in conjunction with the Lincolnshire Wildlife Trust, the Fallow deer herd numbers about 20 animals. Occasional deer have swum ashore to join escapees from Normanby Park.

Fallow are reported in the Trent Valley from Swinderby northwards, these reports probably relate to transient animals, but the establishment of a new Fallow population may be occurring in this area. RETURN 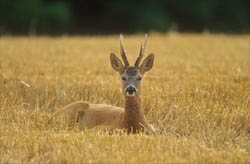 Roe are indigenous to Lincolnshire but declined during the Middle Ages, a period that was perhaps the heyday of coppice woodland management. They were scarce in the Midlands by 1586 and probably extinct in England by the 18th century with native Roe only persisting in the Scottish highlands (Prior 1995).

Native Roe are known to have persisted only in the Scottish highlands were they were restricted to Ross-shire, Inverness-shire and Argyll. The Roe’s southerly spread was assisted with translocations, woodland clearance and regrowth following two world wars and since the 1920’s the Forestry Commission’s plantings, these plantations proved an ideal nursery ground for the present population.

The first report in Lincolnshire is from Laughton Forest in 1969 (LNU Transactions), roe had reached the central Wragby-Bardney Lime Woods by 1978 (Johnson, 1985). In southern England releases of roe occurred at:

The roes first seen in Lincolnshire were probably displaced bucks which can travel long distances and a breeding population may not have established until the 1970’s, yet the return of our "native" Roe to Lincolnshire is threatened by the spread of the southern Roe population, a mixing of genes will soon occur. The southern Roe are of Continental stock, so ironically after an absence of centuries the return of "native" Roe to Lincolnshire may only last a few decades, before a hybrid population becomes established. This pooling of the genes is now inevitable. RETURN 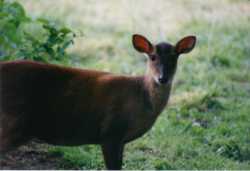 These small deer were originally thought to have a benign impact of our woodlands, and the damage they do to the Ancient Woodland plants such as Bluebell, Orchids and Primrose has only recently been identified. This damage was on a National Nature reserve where the numbers were allowed to increase for 15 years before the adverse impacts were identified.

Muntjac were first imported and kept in collections in the 19th century, these included Tring Park Hertfordshire and Woburn Abbey in Bedfordshire (Chapman, 1994). Woburn first released Muntjac in 1901 and then during the period 1947- 52 the Duke released at least five breeding groups to locations in, Oxfordshire, Norfolk/Suffolk, Northamptonshire and Kent (Chapman, 1994). In Lincolnshire Muntjac have been recorded from the 1970’s, almost certainly the population is due to deliberate releases, that practice is now illegal. RETURN

These are our largest land mammals, commonly associated with images of Scotland or of hunting in Royal Forests during the medieval period.

Kesteven Forest – In Lincolnshire the past Forest of Kesteven was probably disbanded c1200. Deer parks were established at Grimsthorpe in 1536 with separate parks for Red and Fallow deer, the Red Deer Park contained about 60 deer in the middle of the 19th century, with numbers peaking at 260 before World War Two. A large number escaped in 1941 when the park was used for military training, most were culled and it is thought only one hind survived. Perhaps more survived, or she was pregnant with a stag calf, as this was the start of the present feral population. This population has since been reinforced; Three Scottish stags were released in 1973, two stag, and two hind calves were then released in 1998.

Hatfield Chase – A chase is a private Forest, Hatfield is just over the county boundary in West Yorkshire and remained under Forest law until 1629, when the area was drained for agriculture. Red deer are recorded throughout the medieval era at Hatfield with reports of over a 1,000 in 1607 (Johnson, 1985). Recently the Hatfield and Thorne Moors have been used by the peat extraction industry and now comprise part of the Humberhead Peatlands National Nature Reserve. Sporadic sightings of Red deer have been made for 30 years in this area with breeding first reported in 1996. The deer present include some with ear tags. Deer Farms are established in the area and probably the source of these deer.

Saxby and Bonby Carr – Since the early 1990s Red deer have been reported east of the river Ancholme in this area of north Lincolnshire. The origins of these deer is unknown, a stag killed in 1997 was apparently identified by his ear tag as of Hungarian origin and so a farm escapee!

Sporadic sighting of Red Deer occur elsewhere in Lincolnshire, these are most likely escapees from deer farms, or marauding stags from the established populations, so additional populations of Red deer may one day establish in Lincolnshire. RETURN

Three Sika deer were kept at Normanby park in the 1970’s, they proved dangerous and were soon removed. Apart from a single report from Gibraltar Point in April 1993 (which was most likely an immature fallow deer) they have not been recorded in Lincolnshire.

These small introduced deer are our rarest wild deer in Lincolnshire with only three known sightings:

The main populations of these deer are in the Norfolk Broads and parts of the Cambridgeshire fens particularly Wood Walton – National Nature Reserve. RETURN

Grateful thanks for support to