In 2003 the Lincolnshire Deer Group undertook the first countywide survey of our deer population, and landowners perceptions of deer and their impact.  It is only by monitoring deer populations, that the impact of deer on our countryside can be predicted, thus enabling your Deer Group to provide appropriate advice on deer management and woodland protection, before costly damage occurs.

The Lincolnshire Deer Group is fortunate to have considerable support from landowners and managers with 61 contributing to this survey.  The survey encompasses 54,341 hectares of land, with an average holding size of 891 hectares (range 1 – 5,947 hectares).  In Lincolnshire the area of woodland amounts to little more than 3%(1) of the land area yet in our survey the woodland area is 21.2%, this totals 11,528 hectares and amounts to 51.2% of all Lincolnshire’s woodland.

Deer presence was reported on 95.1% of the landholdings.  The species present are primarily fallow, roe and muntjac deer (42.6 – 68.9% of landowners) with 3 reports of red deer (4.9% of landowners).  Before any assessment of possible deer impact is made an estimate of the deer population is needed.  We had 3 reports of red deer and pleasingly 100% of these landowners were able to provide a population estimate.

Perhaps surprisingly more landowners were prepared to estimate the population of the smaller roe deer that is commonly seen individually or in small groups, than the larger fallow deer that are often seen in substantial herds. 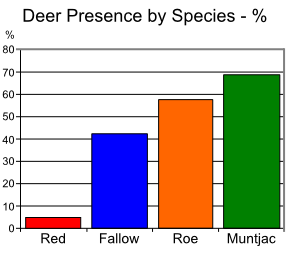 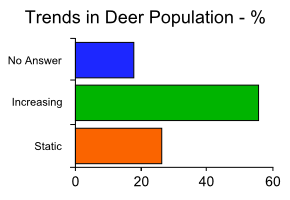 Deer numbers were thought to be increasing by 55.7% of landowners, while 26.2% considered numbers static.  This question wasn’t answered by 23.7% of landowners but interestingly no one considered overall deer populations to be declining.

The number of deer in Lincolnshire isn’t known, however deer density can be calculated from the population estimates provided.  The graph shows the calculated density per km2, for roe at 15.2 km2 muntjac at 16.1 km2, peaking at over 200 km2 for some small woods. Fallow deer density averages 16.8 km2, yet in there strong hold in the south-western part of the county 32.8 km2 are reported. The bars on the graph show the standard errors calculated for deer density and illustrate how individual landowners deer densities would on average differ from these figures. 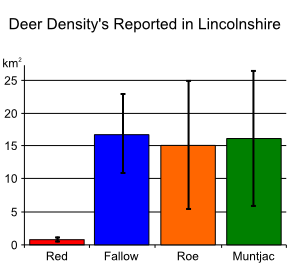 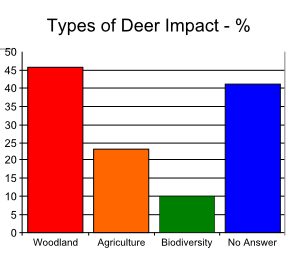 Deer Impact was judged most severe on woodlands with 45.9% concerned by this aspect of our county’s deer population. Damage to agriculture was reported by 23.0% of respondents with only 9.8% concerned about biodiversity, however 41.0% of landowners didn’t answer this question.

Deer are managed on 42.6% of the land in this survey, while 44.3% of landowners don’t manage their deer, with 8.2% not answering this question. 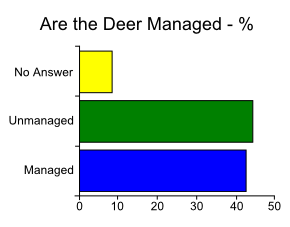 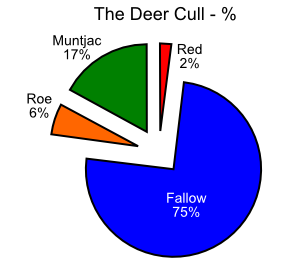 Not surprisingly the annual cull in Lincolnshire is mostly fallow deer, then muntjac and roe deer with only a small number of red deer in the county’s annual cull.

Grateful thanks for support to